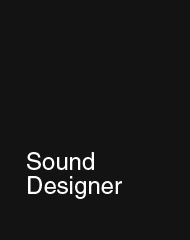 Original music includes: Bell, Book and Candle, The Thrill of Love, Gaslight, Proof, Desire Under the Elms, Copenhagen, Blue/Orange, Misery, Dealer’s Choice, Romeo and Juliet, Broken Glass (solo); Talking Heads, Smoke, Once We Were Mothers, Kes, All That Trouble That We Had (with Russell Gregory); The Wicked Lady, Romeo and Juliet and A Fine Bright Day Today (with Sue Moffat).