Your browser (Internet Explorer) is out of date. It has known security flaws and may not display all features of this and other websites. Click here to Learn how to update your browser.
Home › People › Liam Gerrard 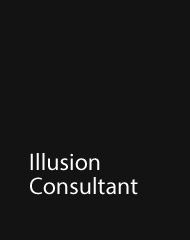 Liam was bit by the magic bug when he was seven when he received his first ‘Paul Daniels Magic Set’ like so many other magicians. He has consulted and created many original illusions for the British Shakespeare Company, Nottingham Playhouse, Derby Playhouse, Theatre By The Lake, The Dukes Theatre, numerous pantomimes and many others as well as leading workshops in magic and illusion for theatre. He has performed in the world’s most prestigious hotels and venues, and consulted in all forms of media for television and stage.

He was resident magician at the Jumeirah Beach Hotel in Dubai Hotel in Dubai for two years, when it was voted ‘Best Hotel in The World’ as well as the world famous Burj Al Arab. He has toured his illusion shows around holiday parks and theatres, and also performs close up magic.

Liam is also an actor and has recently appeared in the New Vic’s Robin Hood and Marian.