Your browser (Internet Explorer) is out of date. It has known security flaws and may not display all features of this and other websites. Click here to Learn how to update your browser.
Home › People › David Fairs 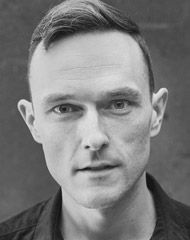 For the New Vic: The Strange Undoing of Prudencia Hart.

Television and film credits include: Comedy Quickies (BBC Three); Byker Grove (BBC One); Be The Business (The Edge Picture Company); For Her (NUA films); Room for Ali (48 Hour Film Project).

David is also a founding member of GOLEM! Theatre Company, for which he has written four plays; he co-developed the multi-lingual (English / British Sing Language) script of Icarus for Vault Festival; he recently directed an independent film of The Importance of Being Earnest, and adapted and directed Hugo Blick’s television series Up In Town for the stage; his adaptation of Messiah – Scenes from a Crucifixion will be performed at this summer’s Edinburgh Fringe.

David trained at Royal Central School of Speech and Drama