Your browser (Internet Explorer) is out of date. It has known security flaws and may not display all features of this and other websites. Click here to Learn how to update your browser.
Home › People › Rhyanna Alexander-Davis 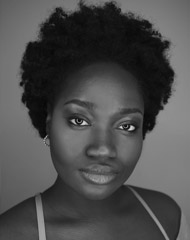 This is Rhyanna’s first appearance at the New Vic.

Stage credits include: Mischief Movie Night In (Mischief Theatre); The Visit (National Theatre); Down There (The Lion and Unicorn Theatre); Trial of Love (The Bread and Roses Theatre).

Television credits include: The Ministry of Curious Stuff, The Revolting World of Stanley Brown (CBBC); Singer stand in Alan Carr’s Singer Takes it all.